Last week, we were in Ocean City for an event. Although there were long days at the event, we also had some time to visit some of Ocean City’s attractions, which include three amusement parks along the peninsula. In our days in the beachside town, we visited Jolly Roger Park, Trimper’s Rides, and Jolly Roger at the Pier. These three parks are all smaller and lesser known parks with a surprising amount of largely undiscovered thrills. From a Go-Kart Coaster to some Wacky Worms, we rode a large number of awesome rides in Ocean City. So sit back, relax, and have a taste of the thrills offered in Ocean City!

First, we went over to Speedworld, which is the home to the “World’s Only Go-Kart Coaster.”

The Go-Kart coaster may not have been an actual roller coaster, but it was a unique twist on the classic style of Go-Karts.

The ride consisted of two upwards spirals and a couple of straightaways. It is a very twisty track. The turns were very fun to ride on, but they made it very hard to pass others.

The Go-Kart coaster is a unique addition at Jolly Roger Park’s Speedworld that I have never seen anywhere else. The ride was very fun and made a great new addition for 2015.

Here’s another shot of the downhill spiral. The spiral does allow you to gain some extra speed due to gravity. This segment is the closest thing in this go-kart track to an actual roller coaster.

Here’s a panoramic shot of the ride. 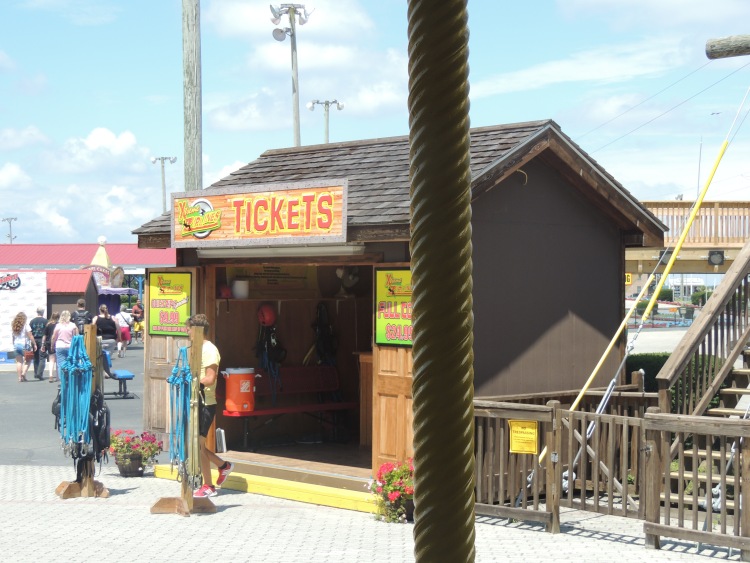 After riding the “Go-Kart Coaster,” we decided to ride the Xtreme Zipline attraction. The attraction was a fun series of ziplines that soared just feet above the go-kart tracks at Speedworld. It had several different cables, a rope bridge, and also a unique “Leap of Faith” element. The Leap of Faith was an auto-belay system. All you had to do was jump off the platform and trust the machine to catch you. It was a unique and fun element of the zipline course.

Speedworld was a very fun attraction. Even though we only did one of the tracks, the park had a wide display of different tracks for different levels of drivers, all of which looked very fun. Speedworld is definitely worth visiting while in Ocean City.

After going to Speedworld, we decided to go over to the main section of Jolly Roger Park. 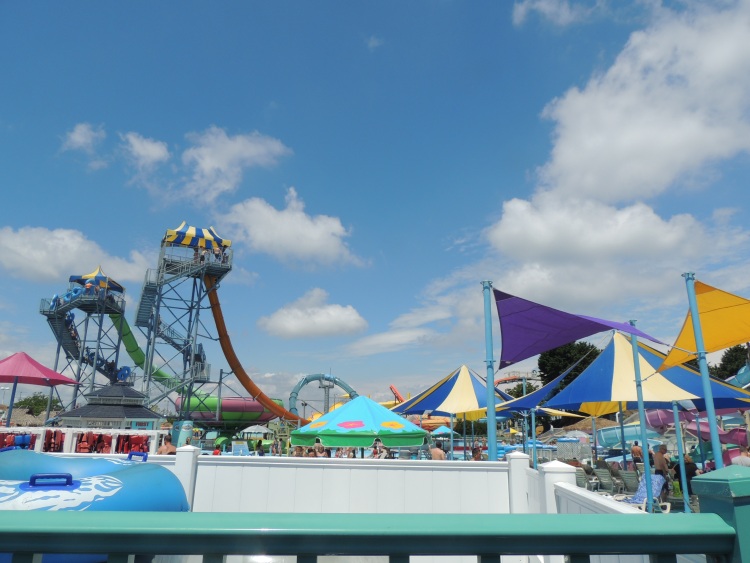 On our way over to the main park, we passed by their Splash Mountain waterpark. The complex contained several slides including a modern aqua-loop, a mega-wedgie ride, and what appeared to be a master-blaster. We never made it to the waterpark, but it looks like a very fun waterpark.

When we walked into Jolly Roger Park, nobody was there except for a few employees. We asked an employee if they were open, and apparently they opened at two. There were no signs letting us know this, so we were VERY irritated. Luckily, they had a mini-golf course, which was open for us to enjoy!

The mini-golf course was very fun and had some nice pirate theming.

The lake and waterfalls were a delightful backdrop in our mini-golfing adventure.

The lake even had an alligator, which in my opinion looks scarier than actual alligators.

We had a fun morning at Speedworld and some of the other Jolly Roger attractions. By the time we were done with mini-golf, we were hungry for lunch and the main park hadn’t opened. So, we went down the road and ate at the Blu Crabhouse, which had delicious bayside food.

After lunch, we had a little bit of free-time before an event, but Jolly Roger Park still wasn’t open. The forecast called for rain and we wanted to play at one of Ocean City’s mini-golf courses, so we went to Old Pro Golf, which has an indoor mini-golf course.

The indoor mini-golf course was themed fantastically to the ocean. With everything from a sunken submarine to Shamu, this course was very fun to play on.

The next day, we had another event to go to. After the event, we had some time, so we decided to go to Ocean City’s Boardwalk, which is the home to Trimper’s Rides and Jolly Roger at the Pier.

First on the agenda was Trimper’s Rides. They had a wide array of rides for a small space. The headline attraction was “Tidal Wave,” a Vekoma Boomerang which opened in 1986.

On our way into the park, we passed the Himalaya ride;

We bought our tickets and made our way over to Tidal Wave.

Tidal Wave was just a Vekoma Boomerang. It was the same ride as always, but it had older restraints which caused an increased amount head-banging. The newer padded restraints on other Boomerangs allow for a much smoother and more comfortable ride.

We rode Tidal Wave and made our way over to the next roller coaster, which was simply called “Spinning Coaster.”

“Spinning Coaster” was the park’s 2015 roller coaster. The SBF Visa Group roller coaster was featured at IAAPA. The roller coaster put a fun “twist” (sorry, I had to use the pun) on your classic family ride. It was smooth and fun. It was actually the best spinning coaster I’ve been on.

Afterwards, we walked back across into the main stretch of Trimper’s Rides, which spans over a few blocks at the bottom of Ocean City’s peninsula.

The main section features a number of family rides such as this little ride, which was being enjoyed by several young children.

In this picture, the park looks like it is a carnival, but it’s a fully stationary park. 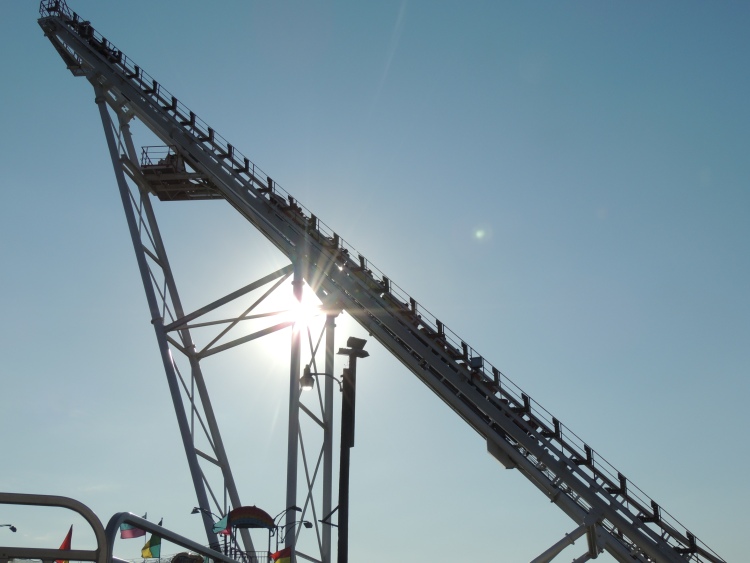 This is what tells me that it is a permanent installation.

The park had a small kiddie coaster, but we didn’t need a credit enough to go ride it. It is one of several family rides at Trimper’s Rides. 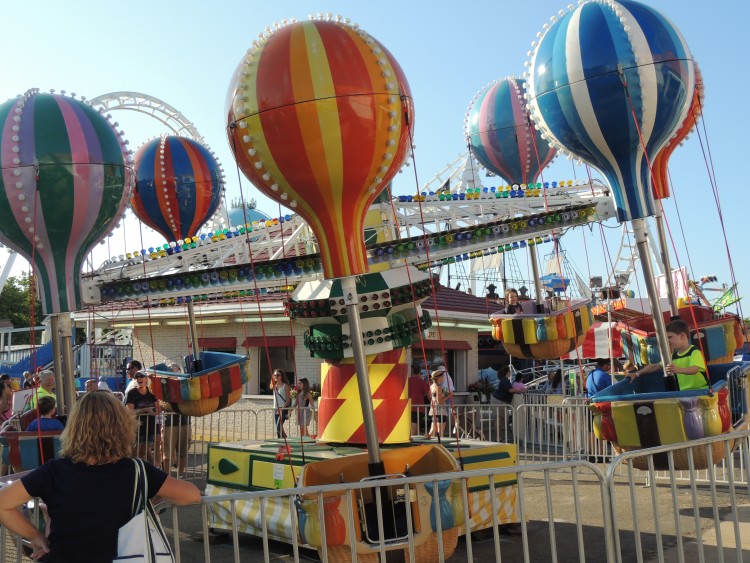 The balloon ride is a favorite out of the park’s 35+ attractions (yes, they have 35 attractions).

This is one of Trimper’s Rides’s classic attractions. The park has been operating for over 100 years and has some very rare rides.

Next, we decided to go get dinner on the boardwalk. We passed by the park’s Wacky Worm, which we would come back to later.

The “Freakout” claw ride was very fun looking. We didn’t end up riding it, but the line for it was longer than any other attraction at Trimper’s Rides.

This was an interesting carnival game. I’ve never seen a game where you shoot fake animal targets. It was another thing unique to Trimper’s Rides.

Next we wandered down the boardwalk looking for a sit-down place to eat. 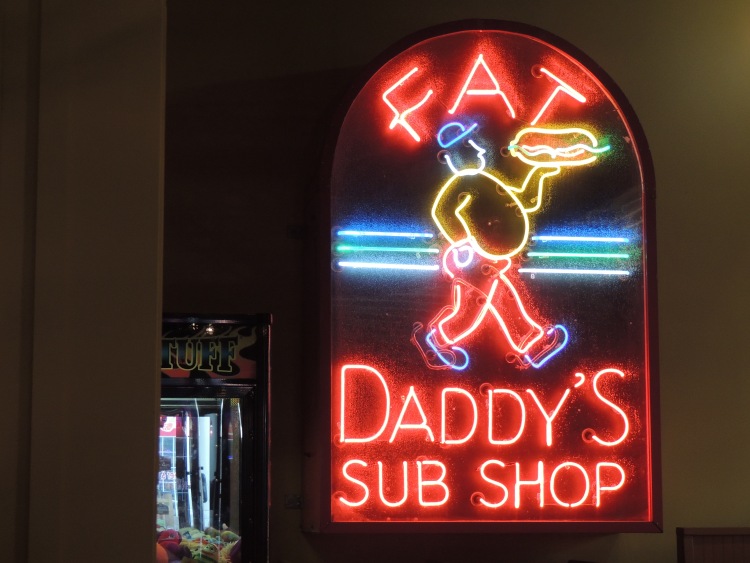 We went a block off of the boardwalk and found Fat Daddy’s sub shop, which was a yummy and quick meal.

Since it was on our way back to Trimper’s Rides, we decided to go over to Jolly Roger Park.

Jolly Roger at the Pier contained a Slingshot ride. I wasn’t in the mood to ride an extreme ride such as it, but guests seemed to be enjoying it!

Right next to Jolly Roger at the Pier was Ripley’s Believe It or Not, which was the home of Bruce.

A long time ago, I think ten years ago, we visited Jolly Roger at the Pier. We rode this ferris wheel, which had a beautiful view of the surrounding parks, city, and the ocean. We didn’t want to stay too long, so we skipped it, but it is a necessary stop while on the pier!

They had thrill rides and family rides such as this carousel, but we were there for their main attraction…

The Pinfari looping coaster was very smooth, especially compared to what I was expecting. 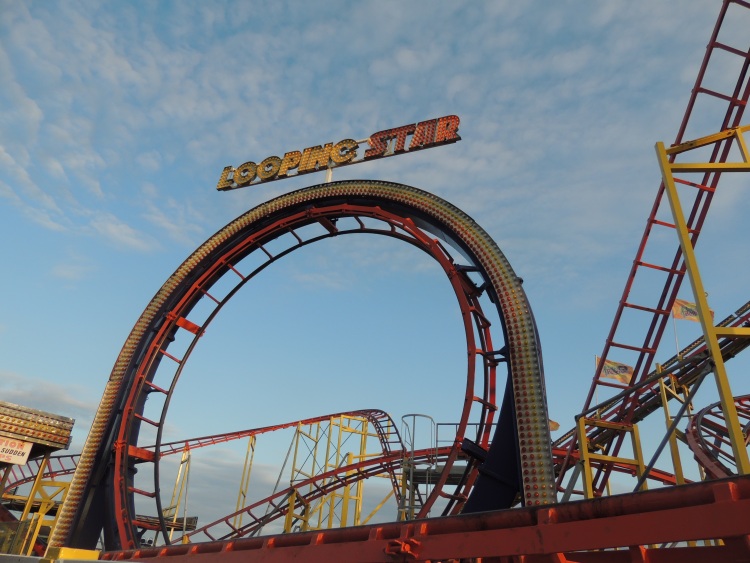 The ride was good for people of all ages. I have to say, it was a fun ride. I have been on B&Ms that were rougher than the Looping Star.

After the Looping Star, the sun was beginning to set. 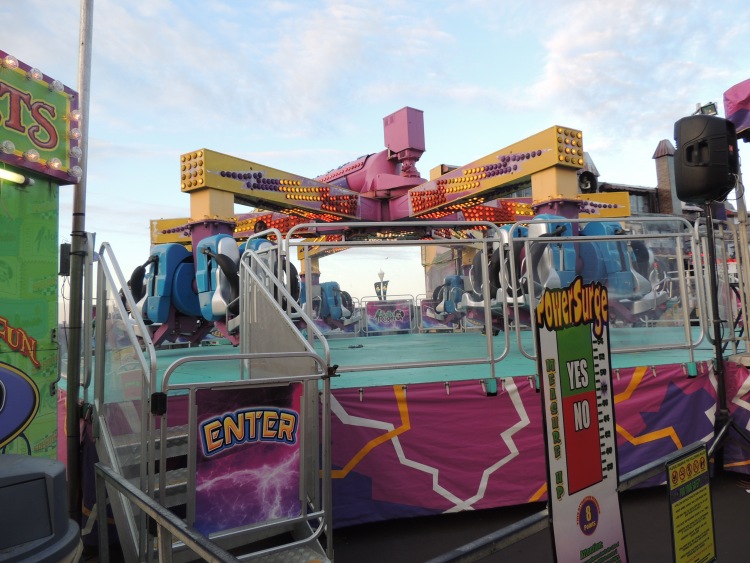 On our way out, I saw Power Surge, and I decided that I had to ride it. I never saw this kind of ride and I had a lot of fun riding the unique thrill.

Afterwards, we ventured back to Trimper’s and rode their Wacky Worm and their Zipper. Unfortunately, my camera died on the way over, so I have no more photos. The Zipper was a unique experience for me. I had never been on a Zipper, so I had no idea what to expect, but I hated it. The ride was sketchy, rough, and a little bit painful. I even felt sick afterwards.

A couple of nights later, we went back to Jolly Roger Park.

The park was home to three roller coasters (again, I only rode the bigger two, so not the one in the foreground). 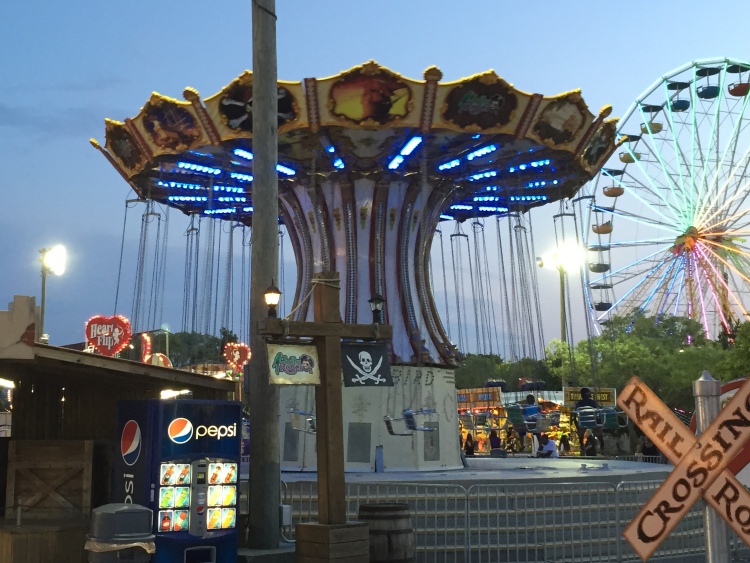 This park was a bit more like a regular theme park. It had some larger rides and was not built on top of a parking lot.

We rode the Wacky Worm, which was a nice family coaster that was nothing special, but was as fun as always. Who doesn’t love Wacky Worms? 🙂

The ferris wheel was lit up into beautiful colors as the night went on.

Finally, we rode Wildcat, which is a relocated Schwarzkopf roller coaster which originally operated at Cedar Point. It was yet another smooth and fun family coaster.

After our ride on Wildcat, our trip to Ocean City was over, the next day we went back home to DC. We had a fantastic time visiting Ocean City’s three parks, which each had unique and fun rides. Trimper’s Rides and the Jolly Roger Parks were both fun small attractions. Have you been to these fun little parks? Do you want to go? Share your stories and thoughts with us on Instagram, Facebook and Twitter! You can also find us on YouTube, Google+, and Tumblr! Thank you for visiting Theme Parks and Travels! Be sure to follow us here on WordPress and share with the buttons below!