A Very Disney Christmas Part #3-Three Parks in One Day!

Hello Everyone! Welcome to the final part of our report from our Disney trip last Christmas! We would leave on one of the busiest days of the year, but it was not as busy as the days to come (such as actual Christmas)! On this day we visited three parks, Animal Kingdom, EPCOT, and Hollywood Studios. It was probably one of the longest days in the parks ever for us, we were probably out for 12+ hours. We rode new rides, had new experiences, and had fun! We hope you enjoy this report!

Animal Kingdom’s tree was one of the finest in the parks! It has very well themed ornaments, 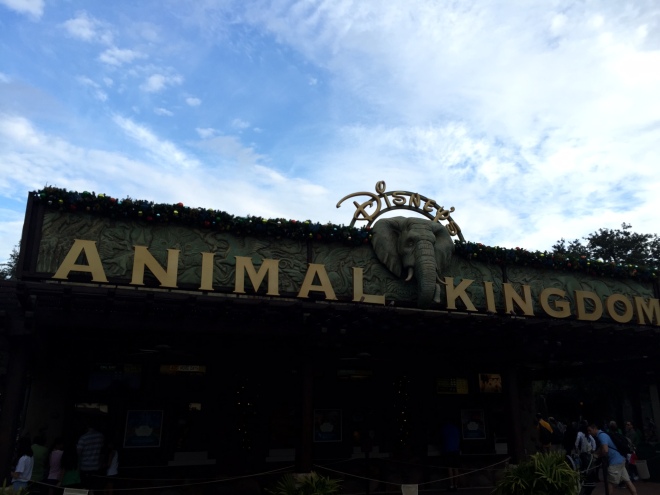 Wait, Disney cut off the head of an elephant and put it on a sign! Is that even legal? 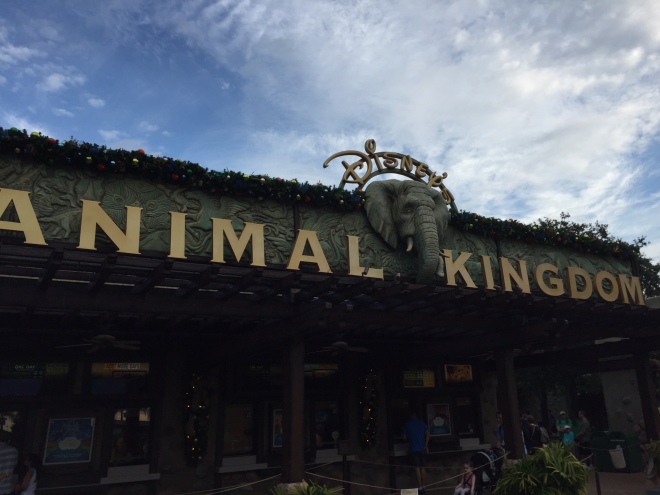 Why are the blackfish people protesting Sea World when Disney does this! 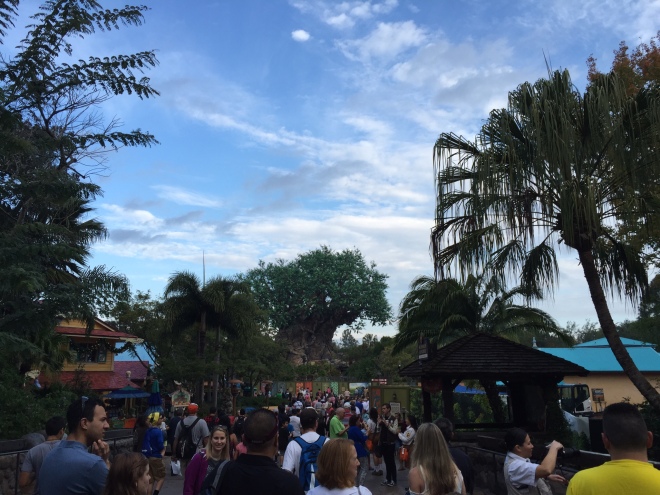 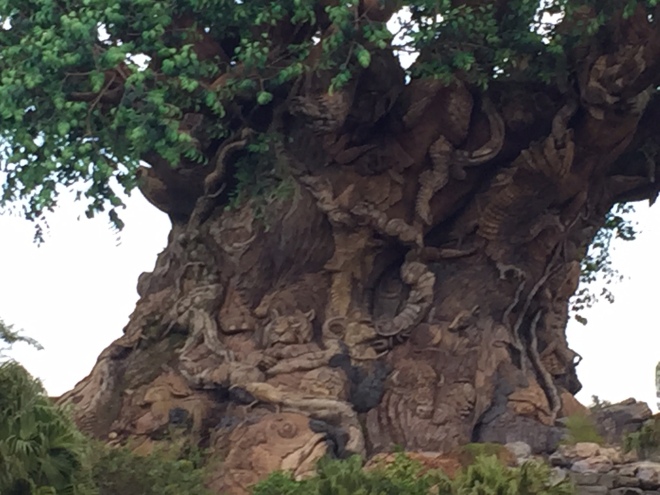 Disney killed even more animals and put them in the tree! Where’s all the protesters?

Okay, to be serious, this is the nicest looking oil rig out there, as that’s what the tree is made of (the same materials, it doesn’t actually drill oil from what I know)!

Expedition Everest, I see you!

This is one incredible looking attraction!

Himalayan Escapes is a great tour company, I give them a five out of five in service! 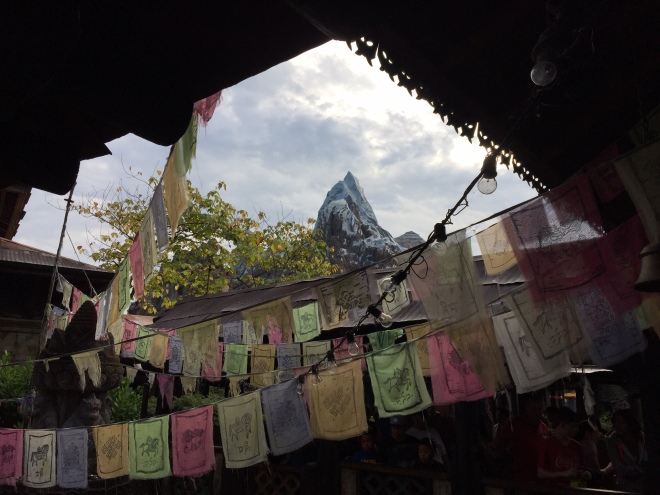 I love the theming in the queue of this attraction, and the queue provides some impressive views of the mountain! 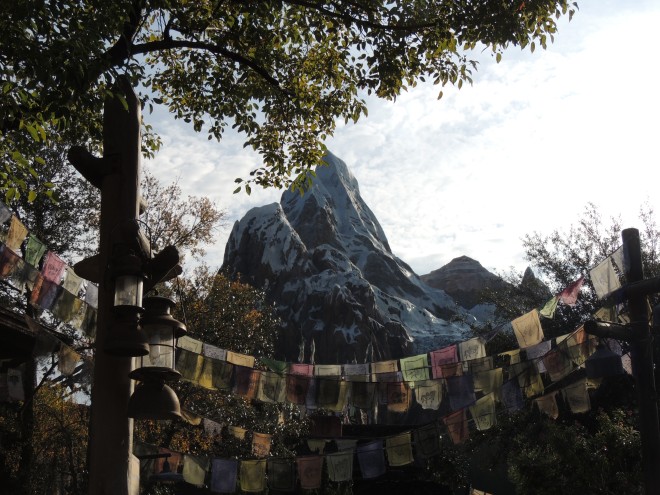 This shot was taken with a professional camera, unlike the others before it, the lighting in the morning makes this mountain shine!

Here’s our POV of the ride that we shot!

This ride is one of the best at Disney, it’s number two in my books to Tower of Terror. This is the only reason we visited Animal Kingdom, this park needs more to do. Dinosaur is okay, we got stuck on it in February 2014, and the Safari is fun, but otherwise this park is lacking.

This park has AMAZING theming, this is a monkey habitat (at least I think they’re monkeys, they could be apes or something).

He’s so lucky! He gets to live at Disney! Hopefully they don’t put him in the tree of life!

These guys were very playful, Animal Kingdom seems to be great for the younger kids (I should know, because I’ve been to Animal Kingdom at a young age)! 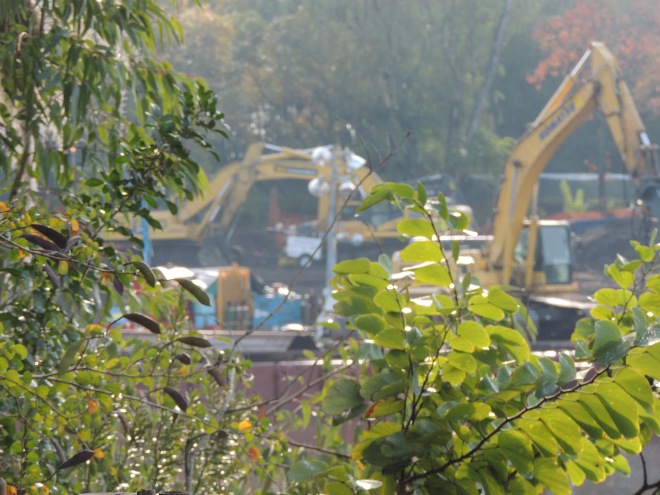 Animal Kingdom’s name could be changed to Construction Kingdom! There were construction walls everywhere!

EPCOT was a bus ride away! Did you know that a statue of Mickey is on top of Spaceship Earth? 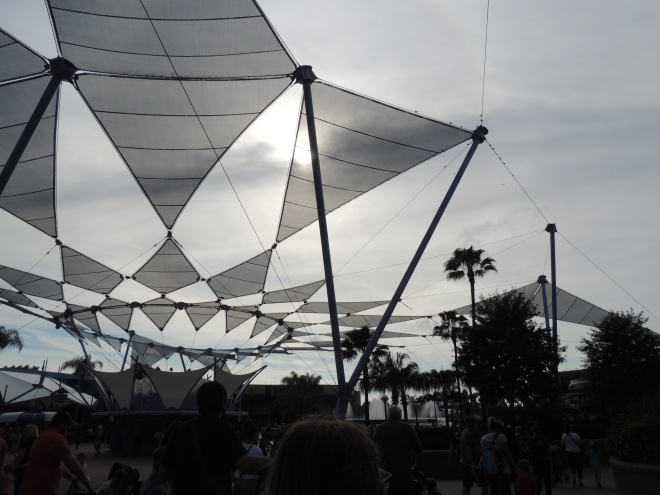 In the center of EPCOT is a crazy fountain that can shoot (I believe) over 100 feet into the air. It makes a nice plaza in the center of Future World.

First off was Future World West, the home of The Land, The Sea, and The Imagination! 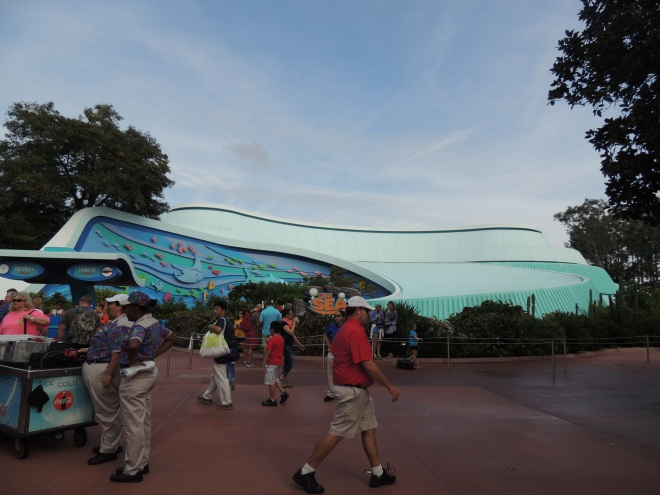 We had a FastPass for The Seas, this pavilion is home to a fun Finding Nemo ride great for young kids. It projects characters from the Nemo movies into actual fish tanks. I’m not sure how they do it, but it looks great! 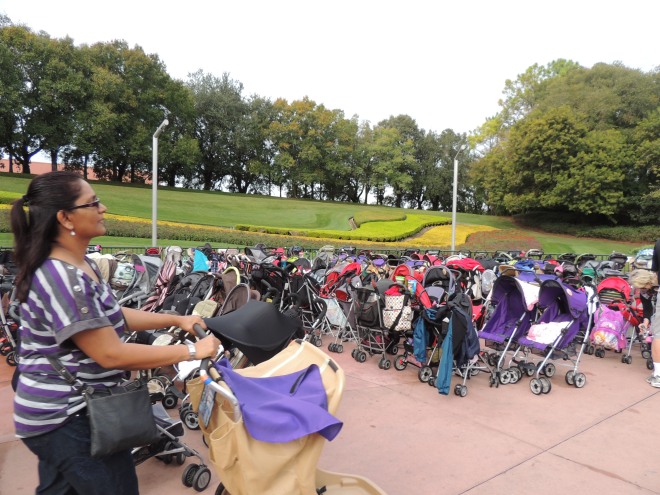 In front of The Land is a stroller parking lot as big as the real parking lot! 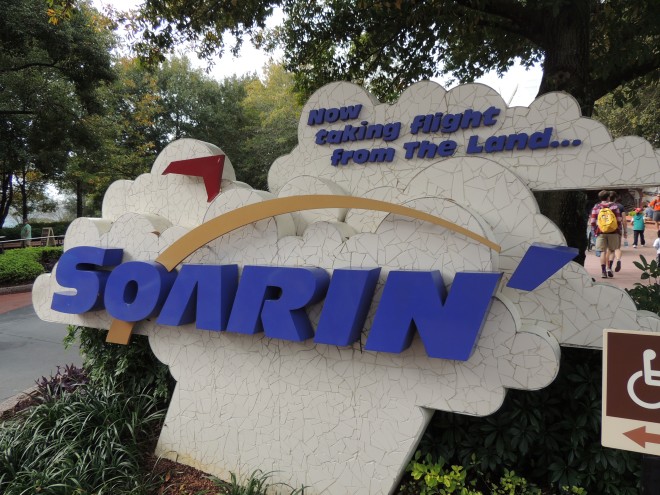 SOARIN’ already had an excessive wait! This ride is badly in need of that third theatre that Disney announced recently, and a fourth one, and maybe a fifth or a sixth one. 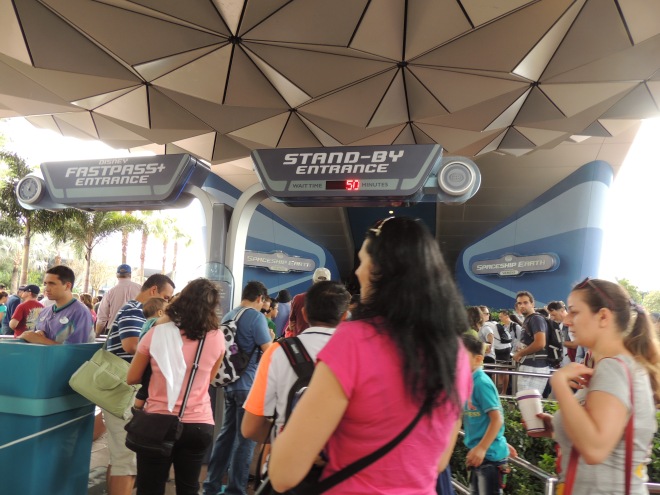 Because that side of the park was too crowded, we checked MyMagic+ for Spaceship Earth’s wait, which was five minutes, then we got there.

We decided to head towards our next FastPass, which was my favorite ride in EPCOT, Test Track. 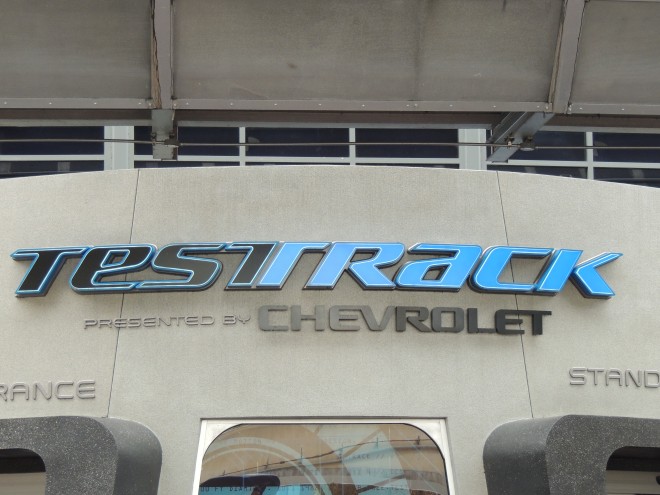 This is one of the best rides at Disney World!

Time to Design our car! 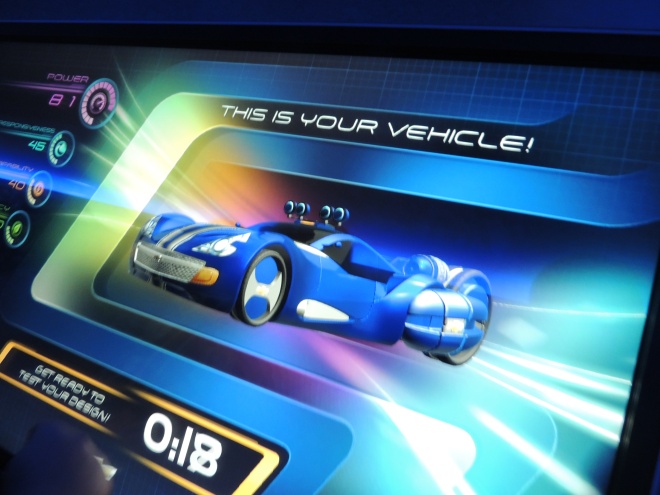 With seconds left to go, we created a power heavy vehicle! 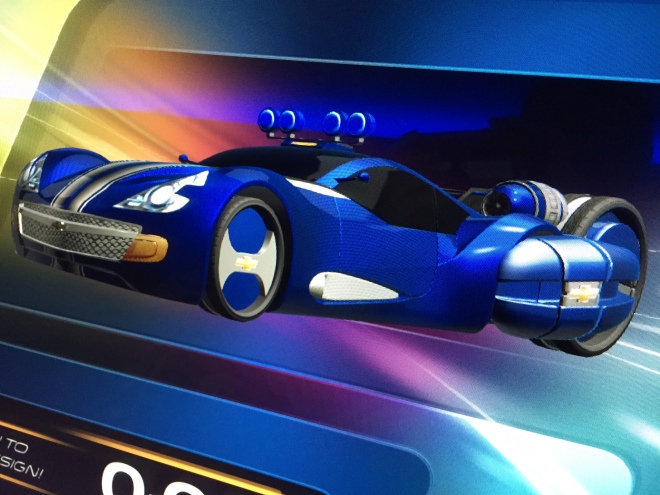 Why doesn’t Chevrolet get some of their ideas from Test Track, this car would be insane!

The one on the right is us! Yes, we made the list!

Now for the best themed centrifuge, a new ride for us!

We’ve heard terrible things about this, but it was not that bad. The G-Forces are intense and it was pretty fun, but it wasn’t that good. 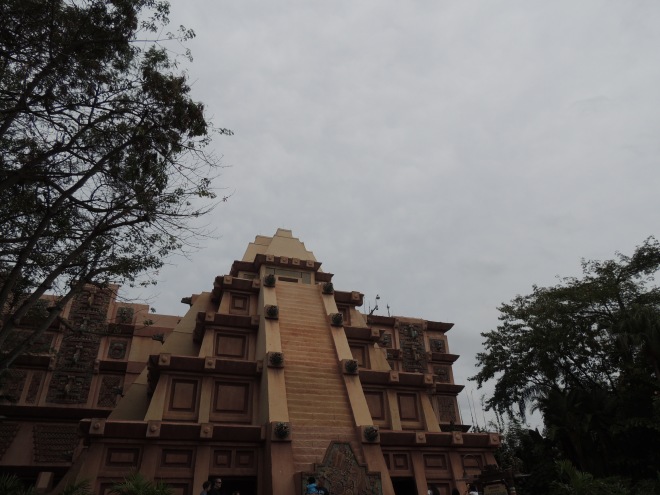 We made our way through Mexico on our way to lunch!

Then we walked into Norway! #SaveMaelstrom

It looks like I was too late (two months to be exact). Elsa and her Frozen powers must already have taken over Maelstrom. To tell the truth, I wish it wasn’t Frozen replacing this, but it’s always good to see change in the parks, so I guess it’s okay. 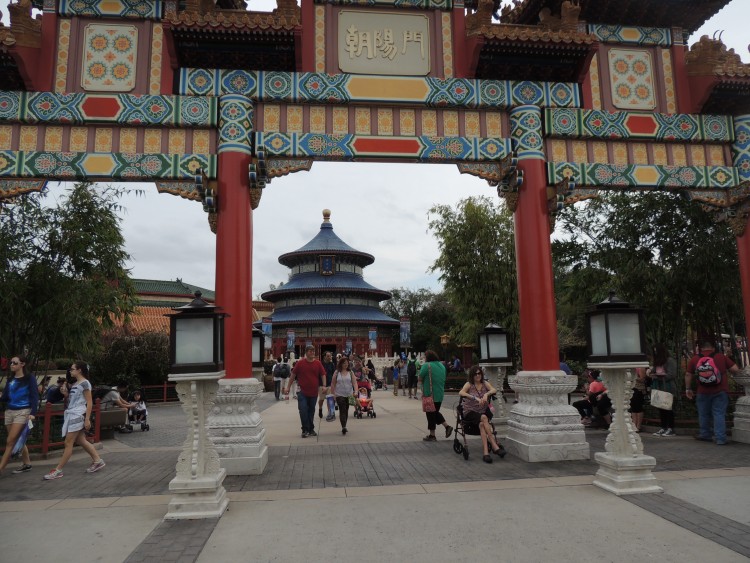 Without Maelstrom, the world showcase really lacks in rides. The Germany pavilion, which was across part of the lake, almost got a water ride from what I know, but this ended up not happening due to budget cuts on EPCOT’s construction (which was over budget). Maybe it could happen now, after all, I heard part of the building stands today!

Next we passed through Germany, this pavilion is home to some good pretzels and is popular for its beer. 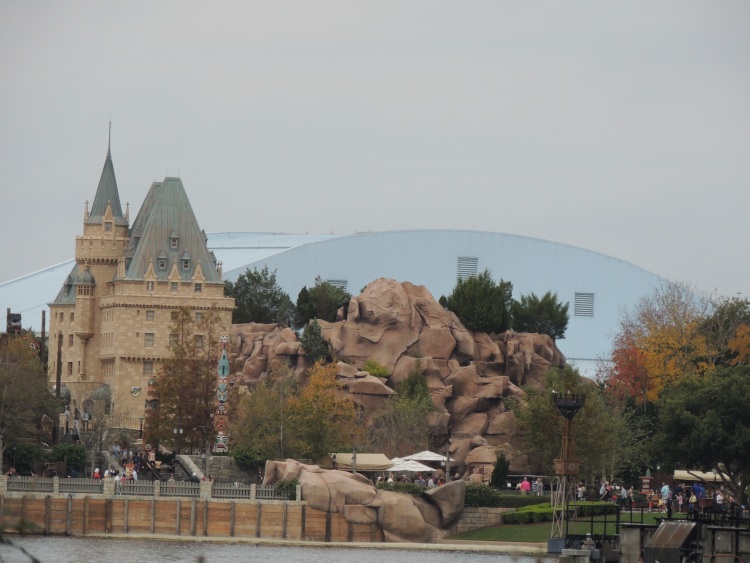 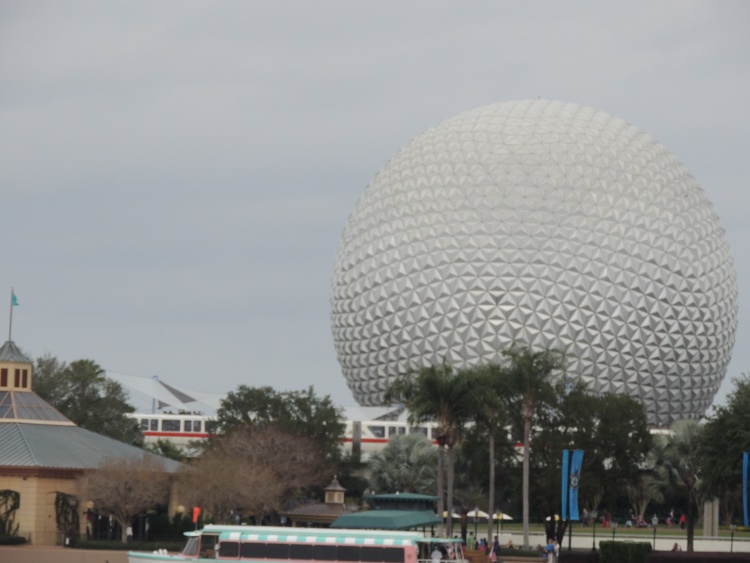 If you look really hard, you might see a speck on top of Spaceship Earth, that’s Mickey. 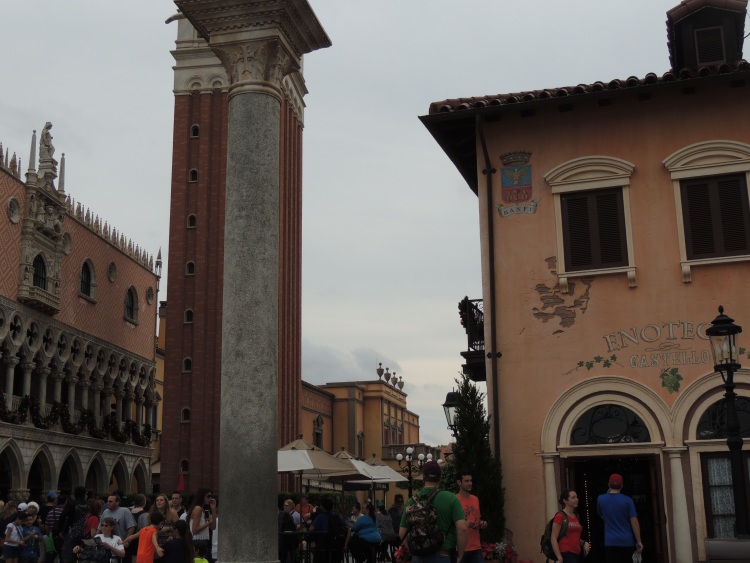 It’s Amurrika! This attraction is supposed to be good, yet I don’t remember it at all! 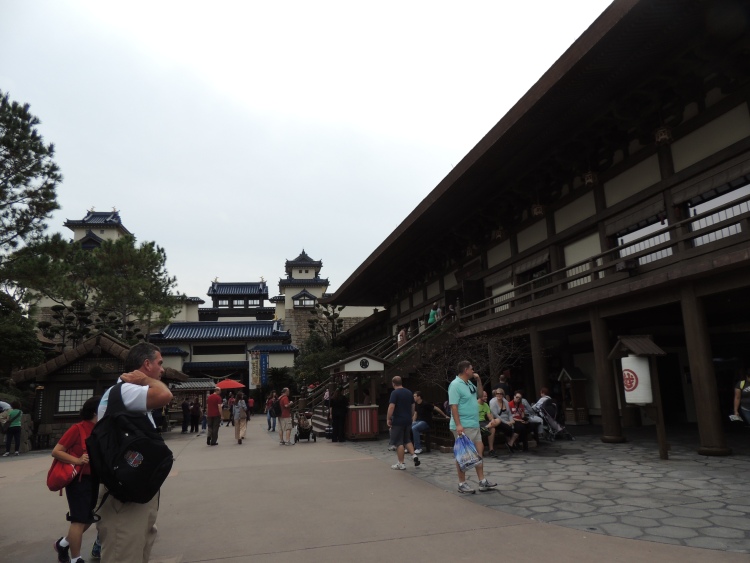 Finally, here’s Japan. Japan is home to some mighty fine food (where we had reservations) and one of the best gift shops at Disney World! 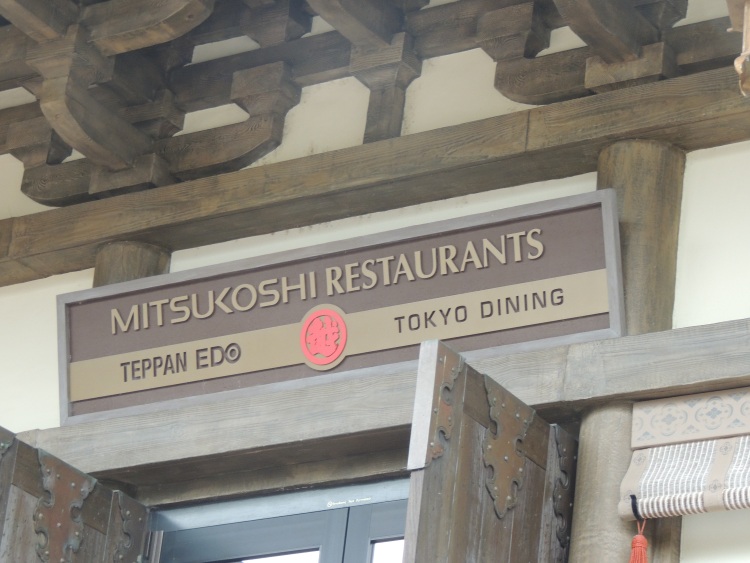 We were here for the Hibachi restaurant. Lunch with a show in front of you, what’s better! 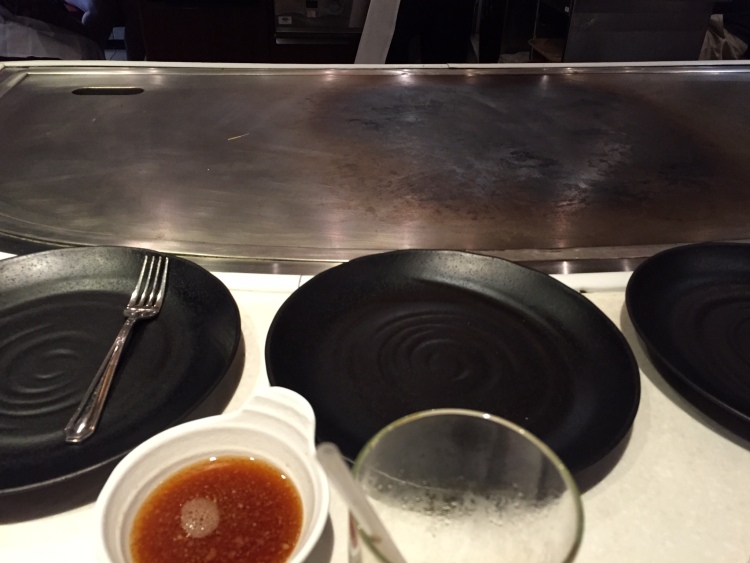 Here’s the grill. Let’s get cooking! 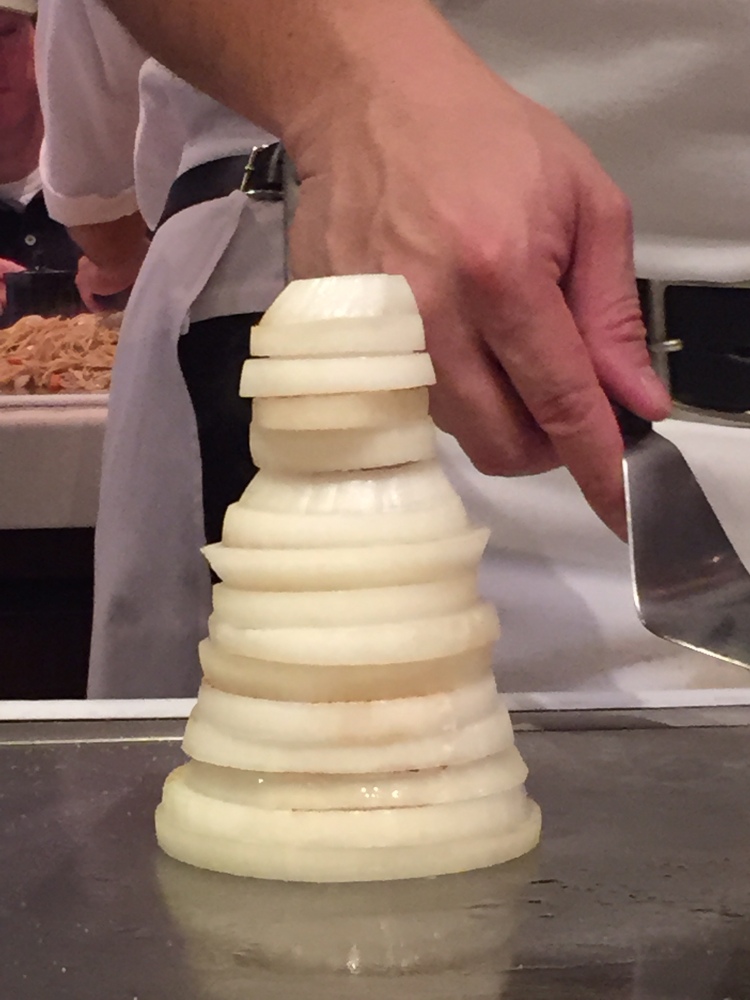 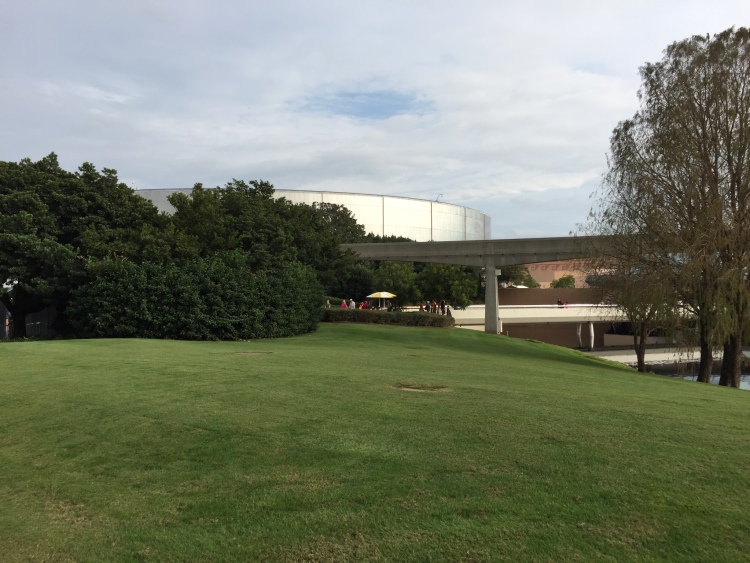 After a great Disney meal, it was time to take a boat over to Future World. 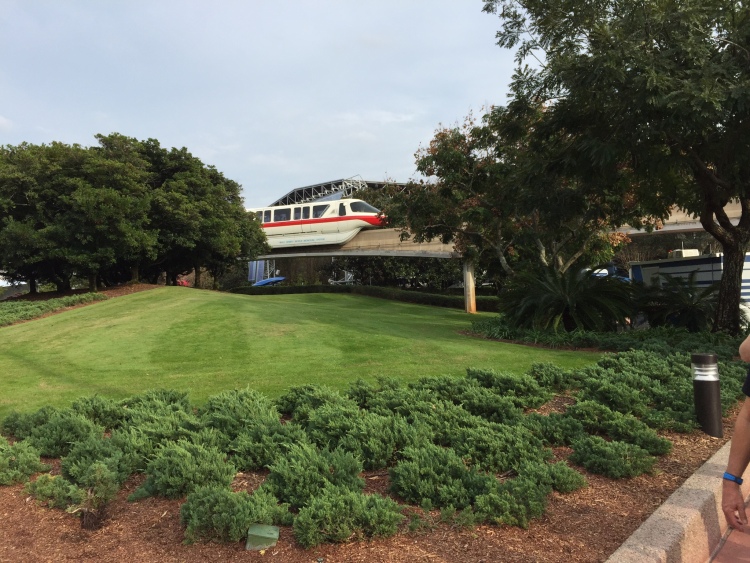 Monorail, one of the best attractions at Disney World, and you don’t have to enter the parks!

Now, it was time to travel through time with Ellen, Bill Nye the Science Guy, and many others. Some have said this is a boring 45 minute attraction, but we enjoyed it a lot! It’s a nice air conditioned break in the middle of the day.

After Ellen, we took the ferry back over to Hollywood Studios. The lines were getting very long over at EPCOT and MyMagic+ said Tower of Terror only had a 60 minute wait (So did almost everything at EPCOT), so we decided to ride our favorite Disney ride!

Here’s the video of Tower of Terror. The ride had a longer than expected wait, the wait was about an hour and a half.

My camera isn’t good at night photos, but we made our way back to the Mexico pavilion for dinner.

We had our dinner at the San Angel Inn, which was not our favorite. It’s not the Mexican food you see in most restaurants, it’s a lot different (I think it’s actual Mexican, not Tex-Mex). Also, two jerks were in front of us in line, and they “had a reservation” and had to get in. We waited for a good ten minutes for them to stop and a long line formed behind us. Finally, they let those two liars inside the restaurant, and they got great seats in front of the ride.

Mexico also has some great shopping! 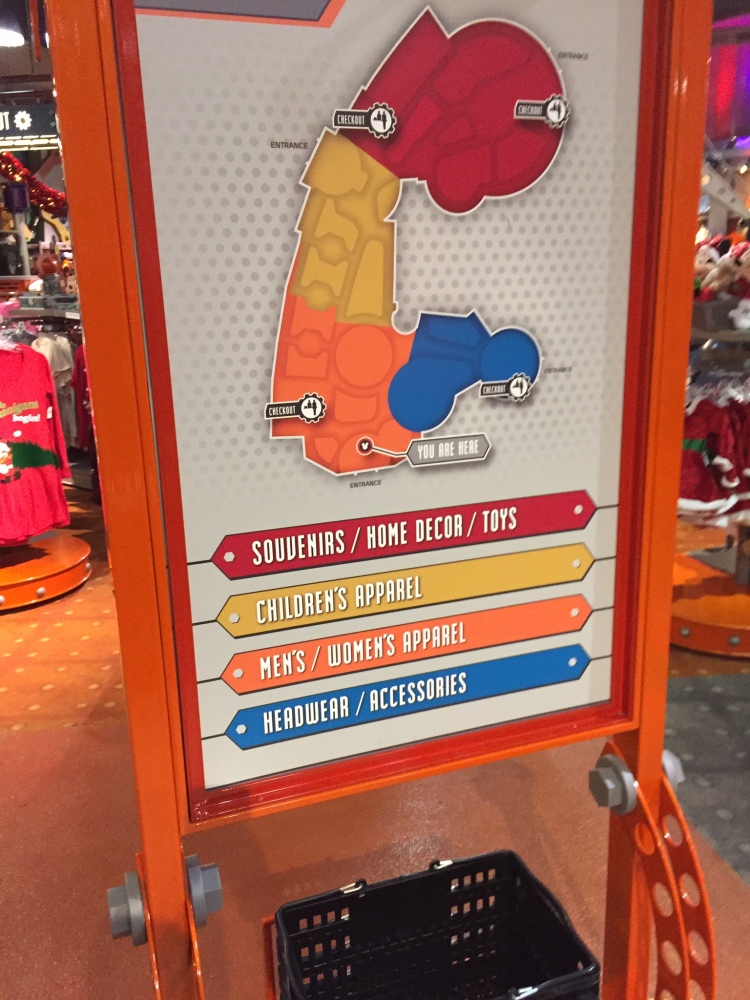 Finally, on the way out, we went to our favorite gift shop, Mouse Gear. Mouse Gear is large enough to have a map! Unfortunately, we didn’t stay for IllumiNations, but we hope to next time!

So, let’s end this with a quick shot of Spaceship Earth at night! How beautiful!

So, that’s the end of our long day in the parks! Thanks for reading the blog! Be sure to follow us here on WordPress and share with the buttons below! Also, you can find us on YouTube, Facebook, Twitter, Google+, and Tumblr!

Hello everybody. Recently I visited Six Flags Magic Mountain for the Legacy of Arrow Development documentary and I wanted to do a review on it. Sorry I didn’t get this out sooner but I haven’t Read more…

Busch Gardens Williamsburg Begins Teasing 2017 Addition + My Thoughts on what it will be!

Busch Gardens Williamsburg is a park known for installing a major thrill every two or three years. In 2012, the park bought an incredibly themed and unique coaster, Verbolten, and in 2015 the park brought Read more…